by Ethan Yee / Friday, 09 December 2016 / Published in Our Inspirations 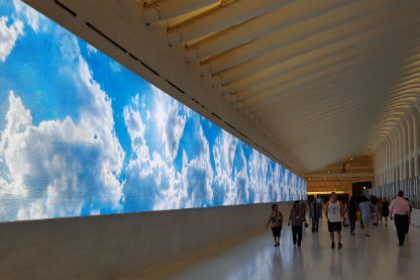 On August 16, 2016, the Westfield World Trade Center opened its doors to become the new, shiny and somewhat controversial retail beacon for Lower Manhattan. Like any American shopping plaza, it offers in-store experiences of popular brands like Apple, H&M and Sephora, but there are many crucial points separating this massive endeavor from your average consumer hub.

Certainly, part of that x-factor stems from the fact that downtown New York was forever changed on September 11, 2001. Another unique feature is the new center’s business model, which will generate revenue by offering category-exclusive partnerships for juggernaut brands including Pepsi Co., JPMorgan Chase & Co. and Ford Motor Company. However, it’s the trailblazing digital display network furnished by ANC (formerly ANC Sports Enterprises) that will turn heads and monopolize the attention of 100 million visitors expected to pass through Westfield’s 365,000 square feet of retail space each year.

Digital Signage Connection caught up with ANC’s Chief Technology Officer Mark Stross and Executive Vice President of Technology Solutions Chris Mascatello to discuss the ins and outs of their multi-year digital signage partnership, which already accounts for unprecedented image capabilities and one of the largest seamless LED canvases in the world.

“I have 30 years of pedigree, but this is the one. This deployment is right at the top for me,” said Stross. “You can’t help but be moved when you’re in that building and you see all that work come to fruition. I cried like a baby. It was the best day of my life.”

Stross is the proverbial mastermind behind ANC’s proprietary vCOMM software platform.  vCOMM was developed specifically for the retail, transportation and commercial markets, utilizing many of the features from ANC’s live-event platform including precise frame synchronization across multiple servers.

“The algorithms are what make it the most advanced rendering in the world,” said Stross. “The software synchronizes all renders so it’s a frame accurate canvas as opposed to say … all of the digital signage in Times Square, where there is actually a four-to-five-frame lag.”

In addition to the black LED package, the 10,000-pixels deliver the highest resolutions available across all 19 digital screens. But the number-one asset here, according to Stross, is his software’s capacity for incredible scalability and the unparalleled ability to dissolve from one image to another.

“The East/West connector has 16 HD screens at 720p, the LED package is a black package and we’ve even got trans-LED sticks for the elevator lobby so it’s 50 percent transparent, but I agree that the secret sauce for all of it is the software,” said Mascatello. “It offers an unmatched level of image clarity. Between all the planning and logistics and trips to Hong Kong and China for the right hardware, it was a long three-year process with Westfield.”

“Lower Manhattan is full of historical significance and to me, the Oculus is America’s Sistine Chapel,” said Stross. “We are proud to be a part of this new iconic Westfield World Trade Center, introducing new technological capabilities that will enable consumers to experience the area unlike any other location in the world.”

Historical significance aside, the fact remains that the Westfield World Trade Center now stands at one of the busiest and most accessible crossroads in New York City. 300,000 daily commuters, 60,000 neighborhood residents, 13 subway/PATH trains, multiple ferry lines and a virtually endless stream of tourists will culminate in an estimated 285 million annual impressions. In other words, Westfield World Trade Center foot traffic will more than double the audience of all three of the largest New York metro area stadiums every 24 hours. As the digital sign says, it’s “The New New York Place to Be.”

Thanks again to ANC’s vCOMM operating system, The Westfield World Trade Center will combine with the 53 digital signage sites at Fulton Center and are capable of syncing up thereby connecting Lower Manhattan on a level most citizens in any metropolitan city probably never dreamt about.

“While the Westfield World Trade Center sets a new standard for out-of-home digital media, we’re going to continue to go after new, iconic spectacles while integrating innovative technologies such as biometrics,” Stross said. “After spending most of my career tackling the environment of three-to-four- hour high profile live events, it’s exciting to face new challenges in the 24/7 digital signage market as ANC continues to grow into new industries. To be completely honest … I really just want to light up buildings.” 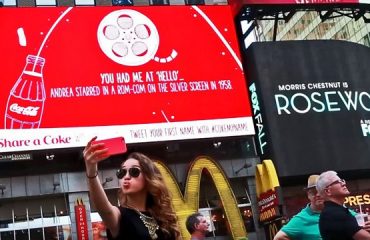